It is that time of year again! Time to pull out those ball gowns and tuxedos to pay homage to the new king and queen.  If you have had the good fortune to attend one of the balls hosted by local Mardi Gras Krewes then you know how amazing those costumes can be, and you may have even wondered what happens to those costumes once the show’s over.

The Baton Rouge Room Archives has worked closely with a number of Krewes to preserve their organization’s memory.  One of the Baton Rouge Room’s favorite services offered is the preservation of textiles.  We have worked with groups such as Krewe de la Capitale, Krewe of Romany, Mystic Krewe of Apollo, and Krewe of Artemis to preserve ball costumes, back pieces, club records, and memorabilia.

One of our more extensive collections comes from the Mystic Krewe of Apollo, a gay men’s organization that puts on an extravagant, traditional-style Bal Masque in support of AIDS research.  Each Bal Masque has a theme which is central to the evening’s main entertainment, the tableau in which members are uniquely costumed to represent the theme of the ball. The costume pictured below, is of King Apollo IV, from the 1985 Bal Masque, 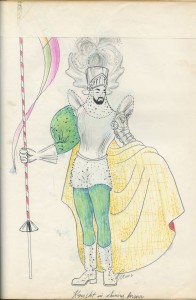 “Games that we Play.” As you can see from the intricate detail and size of the costume a great deal of time and skill goes into creating them.  The Krewe of Apollo has utilized the skills of costume designers, Carol Guion, who has been working for Apollo since the early 1990s, and Charles West, who was one of the group’s first designers.  The designers are integral part to the development of a theme for the festivities and begin working on designs almost a year in advance.

Another Krewe represented in the Baton Rouge Room is the Krewe 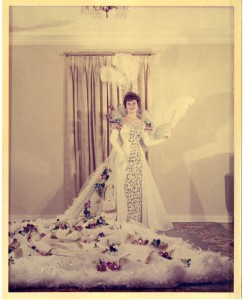 of Romany.  This Krewe, created in 1949, was one of Baton Rouge’s first women’s Krewes.  In many ways this ball served as a debutant ball.  In order to serve on the court or to be Queen, women had to be between the ages of 17 and 25 and never been married, and their mothers had to be members in good standing.  Loretta Shelton has been the Krewe’s costume designer for 40 years and before that, costumes were designed by Frances Doyle and other members.