Victoria’s Toy Station has been a beloved part of Baton Rouge retail for over thirty years. The store fits an incredible amount of merchandise into a relatively small space. Shelves go from the hardwood floors to the ceiling, and each room has at least one additional display in the center or tucked in the space between the end of a shelf and a corner. Each room has a theme, ranging from costumes to art supplies to seasonal displays. “We have a boy’s room, ages 6-12, and then we have a girl’s room, and then we have our doll room, toddler, baby, art, so everything is done by division. Like, the bathtub room, and things like that. It’s fun, and one of the pluses of being in this house is we can do it that way,” says owner Katie Culotta Shoriak. 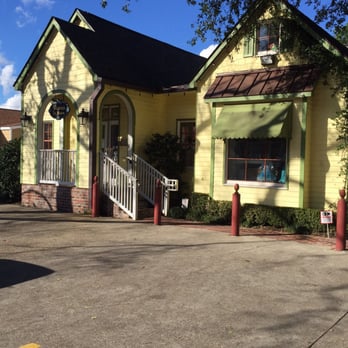 “My mom opened the store in 1984 and I started running it about ten years ago,” she says. “I was four when she did it. She just saw that there was a niche or need for specialty toys and gifts for kids. She actually opened in Catfish Town, which is downtown, and that’s where the name of Victoria came in, because we were in a train station. So Victoria, from Paddington Bear.”

They were only there for eighteen months before the entire development was closed, but the transition to their current location in the heart of Baton Rouge’s rapidly expanding midcity neighborhoods was an easy one. “We’ve lived in the neighborhood all of our lives, so. My parents bought this house, and we actually own the house behind us too. We love being in the neighborhood, and we’re a destination. People come to us rather than being in a strip center or at the mall or whatever,” Shoriak says.

It’s definitely a family business: “My mom always tested things on me, and I went to market with her. It’s kind of like now become one of my children. I have two, who I do the same things with.”

It hasn’t always been easy to live and work right off one of the city’s major thoroughfares. “We have been here when people were scared to come to this area, and we’ve ridden it out, and we love this area. We would never go anywhere else,” says Shoriak. “We love Government Street, we always have. It’s the corridor to downtown. 55,000 cars pass in front of the store every day. Midcity has always been home to myself, to my family, but we are so fired up about all the new restaurants and new things that are coming this way. Traffic in Baton Rouge is a nightmare, and so if I can stay in my bubble, and everyone else can too, it’s gonna be so much better.”

As with any independent company, the biggest competition is big box stores. The only way to compete is with unique products and excellent customer service – two areas in which Victoria’s Toy Station excels. “I’m constantly reading toy magazines and looking to see what the newest latest and greatest is. We go to Toy Fair in February, which is when all the toys are debuted. We also go to gift shows, because that’s what sets us apart. You can come here and get something for a newborn baby, or a nineteen year old girl, or moms get stuff for themselves too,” Shoriak says. (This interview was, incidentally, a great excuse to do a little Christmas shopping.)

“I think that the big box stores definitely cause issues with us with pricing, we’re very aware of that, we try to stay on top of those things, but something that WalMart buys 15000 of and I only buy twelve of, you know, of course they’re going to get a better price. I try to stay away from those things, but those are things that people want, and people may come here to stay out of the big box stores and may pay a little more to get that experience. And you get the free wrapping, and you get customer service, I mean, I have girls walking around all day long asking if you need help. When have you ever been in WalMart and that happened?”

Living in the age of Amazon, of course, is another difficulty. “We had a website for about a month, and we could not keep up with the inventory demand. We would sell out of it in the store, and people would want it on the website, and it was just too much. So we do stuff on Facebook and Instagram, and we ship all over the country, especially at Easter time. Easter time we have Easter baskets that are fabulous, and we ship them all over. It’s insane. It’s fun,” Shoriak says. Orders can be made over the phone, and the store is certainly proactive at reaching out to customers on their social media accounts.

Christmas and Easter are peak seasons in the toy industry, especially because the store offers free gift wrapping, a service that has gotten so popular it was part of a 1200-square-foot expansion about four years ago. “It’s pretty magical, especially right now. Children come in and their eyes light up, and for parents, to find that toy that excites them and is going to be the wow of Christmas morning is pretty amazing. It’s crazy, but it’s fun.”

Full disclosure – the library does buy some of its decorations from Victoria’s Toy Station, because the merchandise is just so cool, but Shoriak and her family use our resources as well. “My little girl, we go there a lot for story time, my little boy, we go to the Music Together classes, and I actually chaired the Mercy auction there, and we’re excited to use it again,” says Shoriak. She’ll also keep an eye out at toy fairs for items she thinks the library might be able to use.

So what’s the best way to be a part of the community and to help encourage Baton Rouge towards positive change? “I think people just need to remember to shop local,” Shoriak says. “It would be a tragedy to ride around town and there’s no local stores, no Mom and Pop business. I know it’s easy to shop on the internet and stuff, but shopping local is very important to our economy and it’s very important to the workforce, so people need to remember that shopping local is essential.”

And we agree. So for those of you who might be running up against that Christmas deadline, think of Victoria’s Toy Station – for your kids, or just for fun.

One thought on “Business Person of the Month: Katie Culotta Shoriak of Victoria’s Toy Station”