The first Mardi Gras parade in Baton Rouge was sponsored by two African American clubs, the Purple Circle Social Club and the “colored Esso Boosters,” and took place in 1941.  The Esso Boosters were responsible for sponsoring King Ugandi and his float for the event.  King Ugandi was represented by Ernest Dupuy, employed by Y. & M. V. check office.  The King and his parade followers rolled down South Blvd., on to East Blvd., North Blvd. and  ending on Government Street where the revelers attended a ball at the Club’s headquarters.  There was an estimated 20,000 people, both White and Black, that showed up to watch the festivities.  When asked about the choice of names for the king, the response was this, “Ugandi is a British protectorate in East Central Africa.  It consists of 110,300 square miles and has a population of more than three million highly cultured Negroes.  Hence—King Ugandi.” (Matthews Jr., 1941, p. 14). Visit the following links to read the original announcement in Standard Oil’s newsletter, then called The Stanocolan:

Once Upon a Time

What was believed to be the first, but was actually the second, Mardi Gras parade took place in 1949 and was sponsored by the Young Men’s Business Club (YMBC) of Baton Rouge.  The theme was Mother Goose’s Nursery Rhymes and consisted of 33 floats all representing a nursery rhymes, 4 marching bands from local high schools, and torch bearers.  The parade rolled downtown and made a loop back to the American Legion Community Club where a ball was hosted in honor of Mardi Gras royalty and nobility.

Before 1949, if you wanted to celebrate Mardi Gras, the options were limited to New Orleans or to one of the smaller parades such as those in New Roads or Lafayette.  There was also the more traditional Mardi Gras celebration that took place in the small Cajun town of Mamou which involved the Courir de Mardi Gras – a traditional rural celebration where participants ride through the countryside costumed and masked collecting ingredients for the evening gumbo.   The Baton Rouge parade attracted some of the largest crowds the city had ever seen and that popularity allowed the YMBC to sponsor the parades for eight years.

When there were no parades

There was no definitive reason given by YMBC when they dropped their sponsorship of the annual Mardi Gras Parade and subsequent ball in 1957; however, other groups and organizations kept the celebration going by hosting private balls and parties for members of their organizations or clubs.  The archives houses the Mystic Krewe of Desk and Derrick collection, which is a women’s organization dedicated to the education of women in the oil and gas industry.  They have hosted an annual ball since 1961 that still thrives today.  Another organization whose records are stored in the Baton Rouge Room Archives is the Mystic Krewe of Apollo, which began hosting a lavish bal masqué (masked ball) in 1980.

In 1976, two krewes decided to put on a parade for Baton Rouge.  The krewes Knights of Nineveh and the Ladies of Antiope paraded with 68 units, 14 floats, and 7 bands and was sponsored by the Baton Rouge Mardi Gras Association.  Mayor-President Woody Dumas served as Grand Marshal and rode in a convertible at the head of the parade.  Nearly 100,000 people came out to view the parade that began in the Rebel Shopping Center on Florida Blvd. and rolled East to E. Airport Drive. Ever wondered what the “mystique” or “mystic” meant? This is a designation applied to krewes that will not reveal the identities of their royalty until the opening of a parade or a ball. 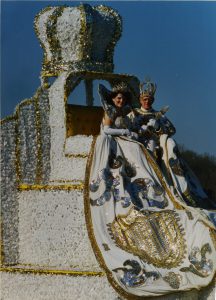 In 1977, new krewes and parades begin to develop.  La Krewe Mystique de la Capitale became the premier parade Krewe in Baton Rouge.  This parade and Krewe is meant to be for the Capital City and not specific to any one neighborhood or specific group or organization.  It’s mission is to bring Mardi Gras to Baton Rouge.  Today, La Krewe Mystique de la Capitale’s parade is one of the longest running parades in the city.

The most recent city parades to be added to the itinerary of Mardi Gras celebrations are the Krewe of Orion, added in 1998, and the Krewe of Artemis, an off-shoot of Orion, added in 2003.  Orion began as a co-ed organization and then split to create its sister Krewe of Artemis, which is a women’s only Krewe. These krewes are still an integral part of the Baton Rouge parade scene.  You can see these parades a few weeks before “Fat Tuesday.”

From 1979 to 1981, two new krewes were added to the mix.  The first in 1979 was the Krewe of Rio, which paraded on Burgin Avenue. In 1981, Don Zeringue announced that the historic Spanish Town neighborhood would host its own parade. The Spanish Town parade became well known for its satire and as a medium to critique and poke fun at current events and politics.  Sporting a pink flamingo as the official mascot, this parade has only grown in popularity through the years and has added an array of parade favorites such as the Krewe of Yazoo Lawnmowers Drill Team and the Prancing Babycakes to name a few.

In 1989, Southdown Flambeau Parade was added to the Mardi Gras Roster.  This parade rolls out from S. Pickett Street and ends at Acadian Thruway and Perkins.  A family friendly parade, the identifying characteristic is the use of flambeau.  Flambeau is a type of flaming torch typically with three candles.  This year marks the 30th anniversary of the Krewe of Southdowns.

There are many smaller krewes that host or have hosted community parades that deserve mention as well. See the list below: