Brad Jensen developed his first T-shirt brand, Icon, at eighteen, while studying graphic design at LSU. Bricks and Bombs is the culmination of decades of artistic development, business savvy, and a good bit of luck.

It begins with the name – or, not quite, but the name is fantastic, so we’ll start there. “The short story,” Jensen laughed, “it’s from some misinterpreted Clash lyrics.” He carried them around for years until the opportunity to use them struck. “It became a little bit more of an analogy for what I wanted to do with the store and the gallery space initially, and that was, the bricks being a symbol of a building block, something to support a wall, or in my case what I was hoping to build was a community of artists and creatives. And then bombs, of course, being a symbol of destruction, and that juxtaposition of building a community and destroying some ideas of what people thought art is.” 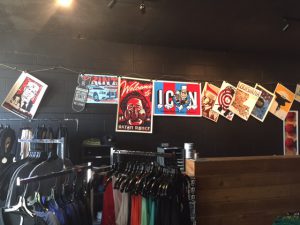 into my fine art,” he said. “I went around to a lot of bike races, I rode BMX, growing up, so it was kind of like a bike-rider thing, and then it sort of evolved into my artwork, and still clothing, and posters and stickers and hats and other things too; it kind of became a brand.”

He was working across the street in a studio in the back of a friend’s shop, what is now a Crossfit gym, when he saw Bricks and Bombs’ current location open up. At first, it seemed like a great office space, somewhere to work outside of his home; the front was, if nothing else, great storage, and a place where people could find his shirts more easily. It was very minimalist, just plain white walls and a T-shirt rack. “It was meant to be store by day, gallery by night, and there wasn’t a lot that had to happen to make it transform into that space,” Jensen said. Bricks and Bombs recently hosted a traveling poster show, and has highlighted skateboard deck art, tattoo and graffiti artists, photography, sculpture, and the senior shows of graduating LSU students. The shows are something he wants to get back to this year: “The more events that we have in between those that are already established,” he said, referring to White Light Night, the Ogden Park Prowl, and other annual MidCity events, “the more we can make this a destination place – make people realize that MidCity is something more than just those bookended events.”

The neighborhood, like so much of Baton Rouge, is slowly changing for 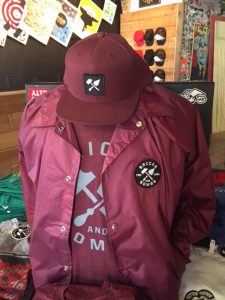 the better. “When I first moved in over here, it wasn’t quite like it is now. It’s been an evolving thing. But it showed a lot of promise,” said Jensen. “Someone told me once that Baton Rouge is the kind of place where you’ve got to get in, stake your claim, and ride it out. And I’ve been riding it out for seven years now, and that’s a positive thing for sure. I’ve definitely seen Saturdays becoming more and more of a day when you can rely on people walking in, when before it was kind of hit or miss. There were a lot of Saturdays when I wasn’t open because I wanted to be doing something else, when no one was walking in. It’s getting there.”

Jensen’s growth as a business person was very organic, based as it is on ideas he’s worked on since he was eighteen years old. “It was an opportunity that I saw. When I first opened up, I thought I’d just try it for a year. I wasn’t risking a lot, other than a year’s worth of rent, because … I had a product, I had a service that was already in place, so this just kind of became a more permanent fixture for all those things that opened up some opportunities.”

But if you’re just starting out, his advice would be to “Do your research, for sure. Think about what it is that you can offer the area. I think that’s the biggest struggle with an artist and a business, or any business, is that you have an idea of what you want to do – and I’m guilty of this for sure, I didn’t start my business thinking, oh, Baton Rouge really needs another T-shirt shop! That was what I was interested in doing. I can understand the challenges now, and I still kind of grapple with it, with what does the area around me need, versus what I want it to be, versus what will it support?”

“I do everything myself. 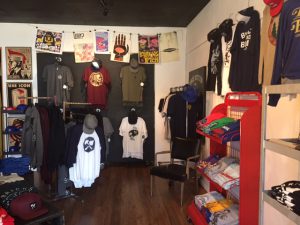 Everything in here, I’ve designed it, I printed it, I folded it, I orchestrated it all,” he said. “I think the attitude that’s over here is a little bit different from everywhere else. People come in here and they know that you can’t find this kind of stuff everywhere else, especially not locally made or locally designed. I think what I’m offering is an opportunity to get involved with the shop – I’m doing some artist series shirts, and I do other events with artists in here. I have kind of an open door policy; I’m not very discriminatory like some of the other galleries. They operate differently than I do. I can be a little less conscientious of bringing someone in, take a risk of having their artwork hanging up in here.”

Really, for Jensen, it’s still about that contrast between bricks and bombs – breaking something down so you can build something better. “I’ve done some nontraditional things. When you hang a skateboard with some cool graphics up on a white wall, it kind of takes on a new meaning – it’s all of the sudden this utilitarian device that people view in a different light. They see the art for what it is, not just a piece of wood with wheels on it. That’s what I was seeking to show people, especially in Baton Rouge – if they didn’t grow up in a subculture, like BMX or skating, to enlighten them to some other aspects of culture that they may not be aware of,” he said.

“It’s all very interwoven, being a graphic designer. I don’t see it just as design, I see it as just as much of a fine art too. I guess when you take that graphic design and you screenprint it, put it on a poster, limit it and put a number and a signature at the bottom, it becomes not just a graphic design piece, it’s an art piece” – or wearable art, like a T-shirt; or mobile art, like a skateboard.

Like Jensen said about the library, in Bricks and Bombs and the rest of the midcity area, “A lot of people don’t realize how many great resources are tucked away.” Stop by and check it out.