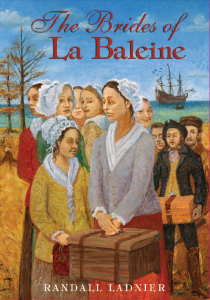 Author Randall Ladnier will be at the Main Library at Goodwood, 7711 Goodwood Blvd., at 7 p.m. Wednesday, February 21, to discuss his book The Brides of La Baleine. The book covers the history of 88 young French women who volunteered to come to the Louisiana colony in 1720 to become brides for the soldiers and settlers here.

The young women were transported on a ship named La Baleine, and they arrived in Biloxi in January 1721. Many of them married and had large families, with thousands of their descendants still living in the Gulf Coast states (including Louisiana!). For instance, one young woman named Catherine Melier married Pierre Prudhomme in 1724, and now their family line consists of more than 700 different surnames! Ladnier himself is a direct descendant of a bride named Marie Angelique Girard.

Adults are invited to this free event hosted by the East Baton Rouge Parish Library Special Collections Department. Copies of the book will be available for purchase.