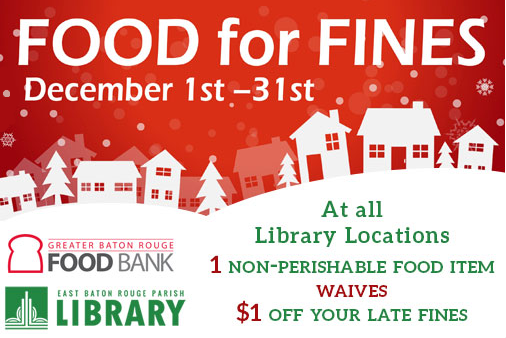 It’s that time of year again! If you have some late fines you’d like to take care of, you can clear them out by bringing non-perishable food items to any branch of the East Baton Rouge Parish Library. One dollar of late fines will be waived for each donated item, and all donations go to the Greater Baton Rouge Food Bank. The program starts December 1st and ends when the year ends on New Year’s Eve. Helping the food bank AND helping yourself to free access to all of the library’s great resources? What a fantastic way to end the year! 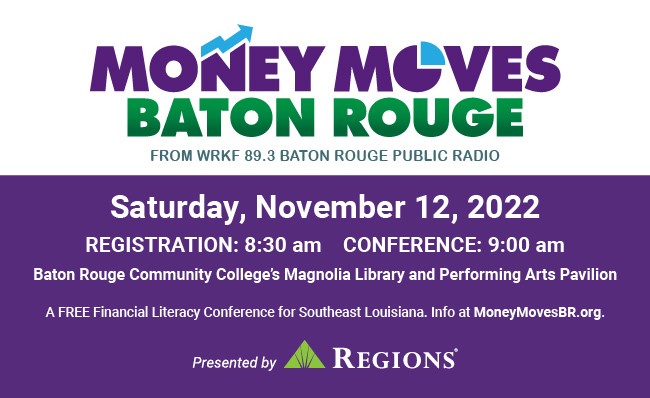 Money Moves Baton Rouge is a free financial literacy conference for families in Baton Rouge who want to learn the financial management skills that will set them up for success. Speakers will include Paul Maassen, president and general manager of WRKF; Stephanie Riegel, host of “Out to Lunch” Baton Rouge and business reporter for the Times Picayune/Advocate; and Peter Ricchiuti, senior finance professor at the A. B. Freeman School of Business at Tulane University.

The conference will be held on November 12th at Baton Rouge Community College’s Magnolia Library and Performing Arts Pavilion, with day-of registration beginning at 8:30am. Topics range from planning for retirement to protecting yourself from identity theft and much more. For more information and to register in advance, please visit https://moneymovesbr.org/

BUSINESS PERSON OF THE MONTH: Shay Joseph of Twist’d Popkorn

Although Shay Joseph officially started Twist’d Popkorn in 2021, this was far from her first foray into entrepreneurship. Joseph has explored many business ventures in her quest to find her niche. In 2018 she started making popcorn as an add-on to her existing custom party favor and t-shirt business. She learned about infusing popcorn from a crafting group on Facebook and took a class on how to make it. For those not familiar with this particular confection, infusing popcorn is similar to making caramel corn or candy apples. Popcorn is covered with a mixture of sugar and corn syrup (and alcohol for the adult varities), then baked.

In May 2019, Joseph held her first pop-up sale at End Zone in Baton Rouge. From there the popcorn business was off and running. She created an LLC and in 2020, introduced kid-friendly popcorn. Soon her house was “swamped with popcorn containers” and Joseph knew that she needed more space for her growing business. While she wanted a dedicated space for her business, she also wanted to be close to home for her two daughters. As a compromise, Joseph bought a building for her backyard where she could set up her popcorn business without having to travel or be away from her kids. Impressively, she reached out to Gold Medal (a company that specializes in popcorn), did a walkthrough of their facility, and purchased commercial equipment to put in her building. With all these pieces in place, Joseph was ready to take the Baton Rouge business community by storm with Twist’d Popkorn.

Joseph recalls having an entrepreneurial spirit even as a kid and after working a lot of different jobs, she realized she “was never satisfied unless I was working for myself.” So, when discussing the pros of running her own business, she doesn’t hesitate to reveal that she loves “being the owner, making the rules and not having to answer to anyone but myself.”

Conversely, Joseph admits that she’s a procrastinator and that “the ins and out of running a business” including things like doing taxes can be challenging. She also had to “realize the difference between a hustle and a business.” At first popcorn was just a hustle, meaning she wasn’t keeping track of how much money she made and generally wasn’t taking it seriously. But when she recognized “what I had on my hands; that I could really do this and it could be a profitable business,” it went from a hustle to an actual business.

Joseph’s years of experience have taught her a lot of lessons that she is happy to pass on to others. A top priority should be “getting your LLC and being registered so your work won’t be in vain.” She regrets not creating a website sooner. Doing so gives customers a single point of contact for the business, rather than the hassle of receiving phone calls and messages via social media. She urges folks to not give up and stresses that “Consistency is key. If you’re not consistent, you won’t see results.” Joseph has learned that social media can be misleading for new entrepreneurs because “People only post the good, never the bad. They post that they are making good money, but not that it took five years to get there.”

While social media has its pitfalls, it has also been an invaluable tool for Joseph’s business. In particular, she says “Instagram has been an amazing outlet” allowing her to meet people and make connections that she would not have encountered otherwise. Offline, she networks while selling popcorn at pop-ups, The Grind (a sports bar and gastropub in Baton Rouge), farmers’ markets in Hammond and she jokes “anywhere that will have me.” While, Joseph eventually wants to have a storefront, she’s not in a rush. She notes that costly overhead is one of the reasons popcorn businesses in Baton Rouge don’t tend to last for long. So, for now she is working on getting Twist’d Popkorn into stores.

Joseph’s busy schedule includes working a fulltime job, running Twist’d Popkorn, and raising a teen and a toddler, which doesn’t leave her with much spare time. She laments that she is not as involved in the local community as she would like to be, but hopes to change that, including making more visits to the library (she and her daughters love to read!).

With Twist’d Popkorn, Joseph puts “different twists on popcorn” with both the adult and kid-friendly flavors. Her goal is “to make it fun, not just fun for kids but also for adults to bring them back to the fun popcorn of their childhood.” 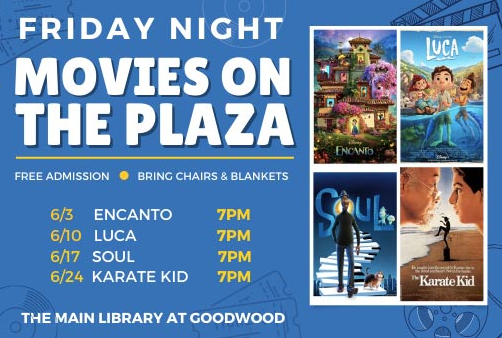 Join us tonight at the Main Library on Goodwood to watch Luca! The movie starts at 7pm. Check out the other dates in this series for more summer fun!

If you like comics, costumes, or both, sign up for the 2022 Mid City Micro-Con’s cosplay competition today! Strut your stuff in a cosplay walk in front of professional cosplay judges and be entered to win great prizes donated from local vendors. Fill out this simple form or email answers to the following questions to midcitymicrocon@gmail.com to register.

Winners will be announced as part of the Mid City Micro-Con’s closing events on Sunday, August 7th! 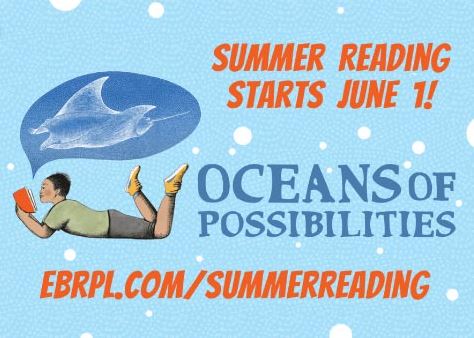 Dive right in with the 2022 Summer Reading Program, Oceans of Possibilities! Beginning Wednesday, June 1, and running through Monday, August 15, enjoy an entire summer of FREE programs, workshops, storytimes, concerts and performances for all ages, scheduled throughout the library system. Find all the program listings in the Event Calendar.

Track your reading and earn rewards! It’s easy! First, sign up at your local Library location or online at ebrpl.beanstack.org starting June 1. Then, read books and log them into your Beanstack account to earn virtual badges, as well as entries for weekly prize drawings! There are reading challenges and incentives for kids, teens, and even adults! The rules, requirements, badges and incentives vary based on the age group. In addition to online Summer Reading Challenges for all ages, there are tons of online programming for family fun with the Virtual Programming Challenge! 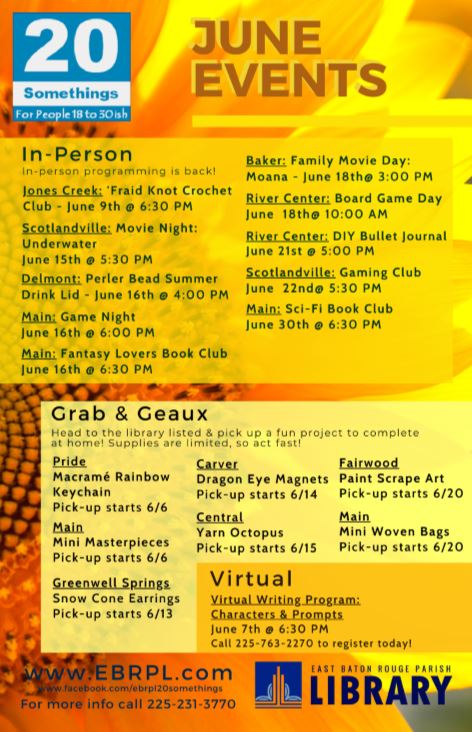 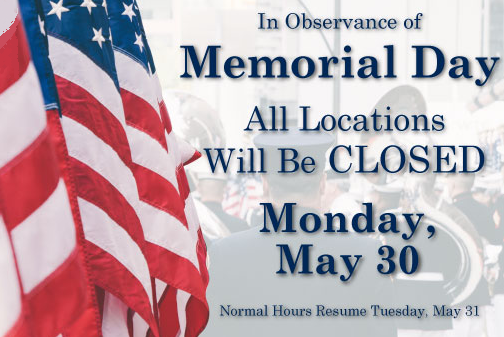 All branches of the library are closed today, Monday, May 30th, in observance of Memorial Day. Normal hours resume tomorrow, Tuesday, May 31st.

The Baton Rouge Concert Band will give a free concert at the Main Library on Goodwood at 7pm. Music will include selections from the Great American Songbook, big band standards, patriotic songs, and marches. The concert is free, and registration is not required.

The library has prepared an infoguide on meeting your baby’s nutrition needs during the formula shortage. You can find information on alternate sources of formula, suggestions for community groups to contact, and links to government websites on infant nutrition and resources.

If your family has been affected by the recall and you are concerned about your supply, DO NOT: 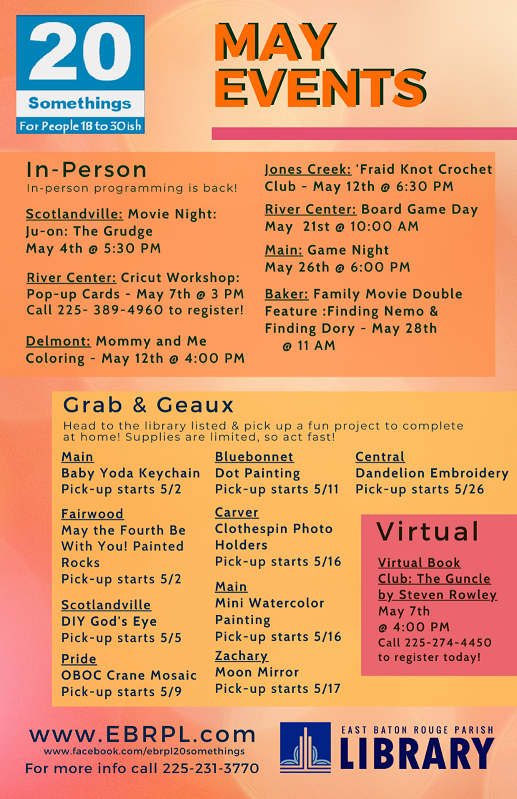